And that’s it… another annual Institute of Community Reporters (ICR) conference has come and gone, and what a blast we had. A BIG thank you to everyone who made it possible – those working behind the scenes running the tech, people who led workshops, folk who braved the livestream and to everyone who got involved in the workshops and online discussions. Without YOU it simply would not have happened.

As part of the day, there were some livestreams. The morning livestream got things off to a great start with from Maff from Camerados, who brought us the sunshine from his lovely garden as well as meaningful insights from his own stories of lived experience. As well as Maff other guest speakers discussed the impact and power that lived experience storytelling has had on them. The morning discussion set the tone for the rest of the day. If you missed it, you can watch it here:

The team at People’s Voice Media then led a workshop called people were able to have conversations about what good lived experience storytelling practice looks like. People came up with some practical and insightful ideas that we aim to put together as a manifesto, (of sorts), that we can bring into practice here at People’s Voice Media and influence others to adopt as well. So, watch this space as this is developed further!

There were also 6 satellite workshops running through the day that other people involved in storytelling delivered. They were all online except one which was facilitated in a wonderful outside space. These workshops explored different areas of lived experience storytelling. From, ‘Stories of the Storytellers’ that looked at the theme of ownership of storytelling, to, ‘An Invitation to a Brave Space’ which focused on how to make spaces safe for authentic storytelling to take place, these were just some of the themes.

People’s Voice Media were also back on the workshop front with a second event that was about exploring what a Day of Action might look like around lived experience… and was it a good idea in the first place. Various ideas about what this might look like were discussed. Some people explored doing ‘story jams’ which hopefully could be happen around a real campfire, or if not a virtual one. Short films with stories were mentioned and stories in different languages.

Other ideas that emerged around a Day of Action were:

All of these are seeds of ideas that could be developed, and we will be getting in touch with workshop attendees to see if people want to take this forward, or any of this discussion forward in anyway.

I think it’s fair to say that the conference generated healthy discussions, ideas and reflections that will steer us in the right direction for future practice. Bringing people together and listening to insightful reflections of practice and who wholly support the way forward was inspiring and re-energising. There was a sense of hope that the Future of Lived Experience is in safe hands. Thanks a million for joining us, and keep in touch! 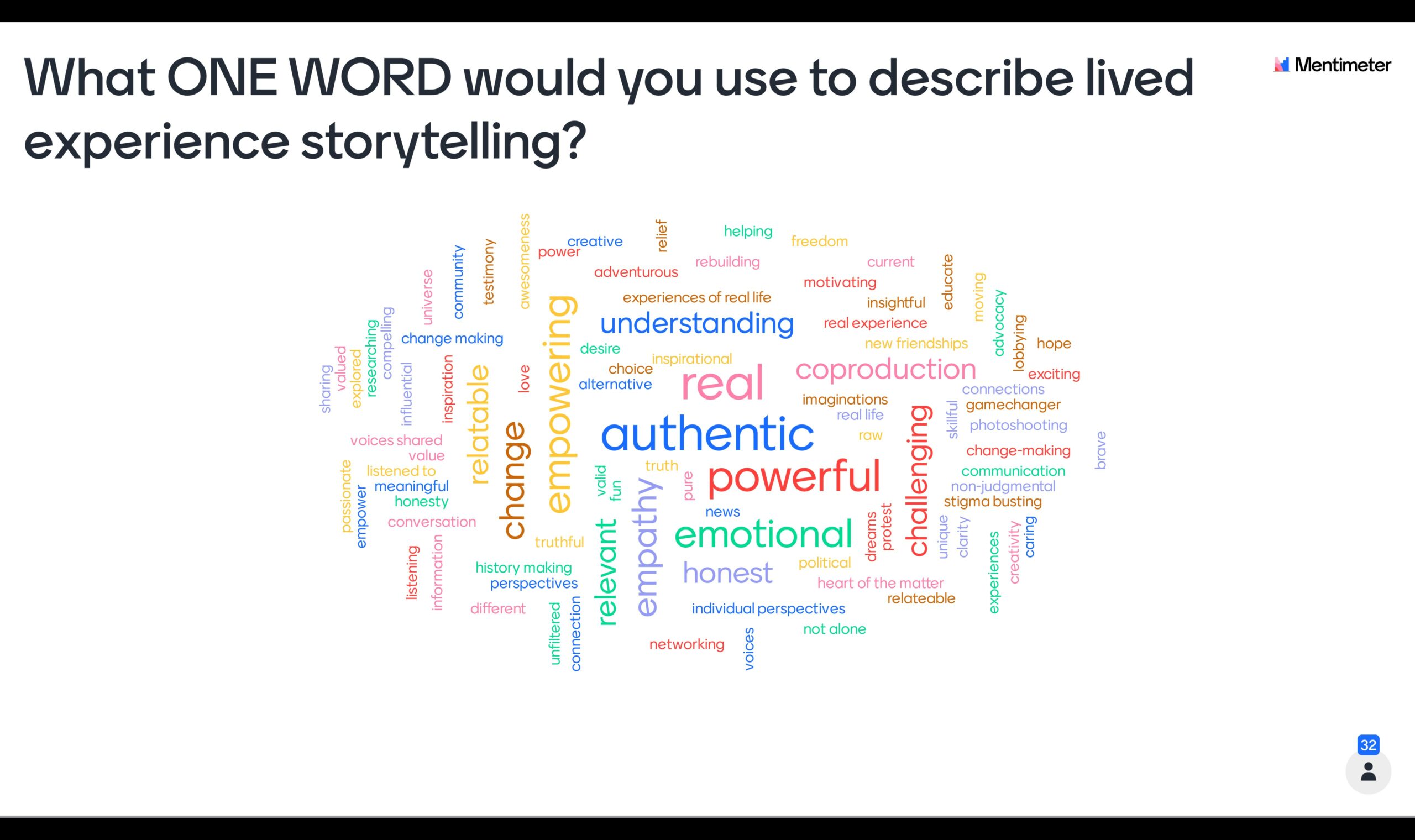 We use cookies on our website to give you the most relevant experience by remembering your preferences and repeat visits. By clicking “Accept”, you consent to the use of ALL the cookies. More Info
Cookie settingsACCEPT
Manage consent

This website uses cookies to improve your experience while you navigate through the website. Out of these, the cookies that are categorized as necessary are stored on your browser as they are essential for the working of basic functionalities of the website. We also use third-party cookies that help us analyze and understand how you use this website. These cookies will be stored in your browser only with your consent. You also have the option to opt-out of these cookies. But opting out of some of these cookies may affect your browsing experience.
Necessary Always Enabled

Any cookies that may not be particularly necessary for the website to function and is used specifically to collect user personal data via analytics, ads, other embedded contents are termed as non-necessary cookies. It is mandatory to procure user consent prior to running these cookies on your website.